An Alliance is formed

A month has passed since Mark saw the first feral dog. It occurs to us that had he not gone off course during his TNGA race we would not be telling this story today. Everything happens for a reason, sometimes you know what that reason is and sometimes you don’t. The drive up to the rescue location is scenic with views of rural north Georgia farmland and mountain vistas. You would never guess the secrets it harbors by the quiet surroundings.

The day we head up for the first rescue operation it’s a beautiful clear cool day and we are hopeful that we will catch as many dogs as possible. Mostly Mutts comes prepared with their transport van, wealth of knowledge and seasoned volunteers. They are hot off a hoarding rescue in Alabama and we are lucky to have them with us. They will turn out to be instrumental in the rehabilitation and adoption of the colony.

The day will not go as planned. We have been to the site location before. We have been transporting food in the month leading up to the rescue op to get the dogs fed and to get them used to feeding in one area while trying to access the heath needs of some of the dogs who appeared to be injured. The first day we spend hours waiting and coaxing the dogs. It goes something like this. So someone is sitting and offering treats to a dog. You aretrying to get the dog close enough to you that you can get a lead around his neck. The dog is close enough to take the treat but not close enough to get caught. He may take the treat he may not. He is wary of people and unwilling to get close enough that he will be caught. These dogs are smart and have been here in this area for years. Although they have seen people they have not been touched by people. They have no connection with humans and they have all been born in the wild. We have been keeping tabs on the dogs by sight and unfortunately we know we are losing some. We have not seen the dog Mark first sighted for weeks now.

The day will end with the capture of one dog and we will be left to hatch a new plan. Our new plan will enlist the help of the closest property owner and we will set up a base camp. Some of the dogs we had first spotted are no longer with the pack, time is now of the essence…. 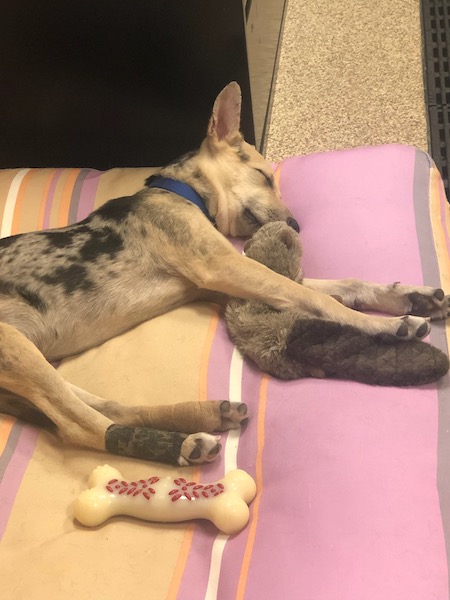 About the Author: admin

This site uses Akismet to reduce spam. Learn how your comment data is processed.